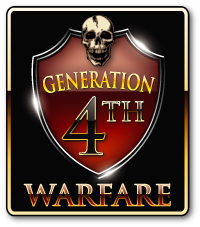 Fourth Generation Warfare (4GW) also called Asymmetric Warfare by some is war or political fighting with unclear rules and unidentified fighters and non-fighters against state sponsored, organized, funded, and armed military components. Fourth Generation Warfare (4GW) was first coined in 1989 by William S. Lind and a team of United States political analysts to describe warfare’s return to its decentralized form.

First, second, and third generation wars historically were fought using clear methods. Each of the methods used in each generation was an escalation or advancement in technology from the previous generation. The intentions, goals, and rules of engagement were Standard Operating Procedure (SOP) by all involved sovereign states. Asymmetric Warfare is an example of 4GW. Asymmetric Warfare as defined by Lt. Gen. Kenneth F. McKenzie Jr, USMC, Director for Strategic Plans and Policy, J5 (Joint Chiefs of Staff) as: Leveraging inferior tactical or operational strength against American vulnerabilities to achieve disproportionate effect with the aim of undermining American will in order to achieve the asymmetric actor’s strategic objectives. It’s a mouthful, but basically it means affectively beating down tanks with sticks, tricks, rocks, and words.

Terrorism is 100%, absolutely in our country, and huge elements of it are pounding at America’s values and will. They are exploiting and breaking all our established Homeland Defense and combatant rules to get a foothold! They use “Lawfare”, media exploitation other similar asymmetric tactics to subvert, tax our time, and divert our focus from our own defense. The time to cease the conventional U.S. warfare model against this threat is now. The time to cease the “Open Borders” model is now! Our nation needs to adapt to, improvise against, and overcome this threat. We must adopt a more asymmetric warfare model that can neutralize the terrorist threat from abroad, and from imbedded elements within our country.

Nearly all of the terrorist events (claimed and unclaimed) in our country have been from radical Muslims throughout the world, and it’s time to start profiling them as such. It’s time to start calling them what they are, “Radical Muslims”! President Obama, his administration, and liberal democrats cannot bring themselves to say it because Obama is literally a sympathizing Muslim and he actually identifies with the radical jihadi philosophy. Informed Christians such as myself believe the Obama administration is engineering a civil war in our country, and ultimately, dissolution of Christianity to make way for his one world government, religion, and economy. Tell us what you think.