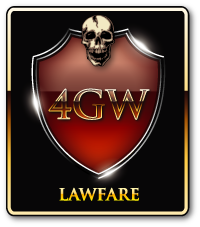 You won’t find the word “Lawfare” in most dictionaries yet. It’s a derivative word from Law and Warfare, and it’s a common 4th generation warfare (4GW) tactic. Lawfare began to be noticed in 2001 before 9/11, but was used as far back as the Nuremburg Trials. Currently, lawfare is mainly used to tie-up a targets time with legal trifles so the objectives of the 4GW agents can be achieved. International Lawfare crosses borders in ways like trade agreements, and human rights issues such as the “Bush Six”. Countries manipulate, or outright violate international trade agreements to economically weaken a country. Sometimes this abuse of law works in their favor and they win cases, other times it simply buys them time to do other things. Muslims use Lawfare as a tool to exploit the legal systems in Israel, France, the U.K., Germany, and even the U.S. I can give 3 examples here, and there are more. 1.) The overwhelming cry by Muslim communities to override a country’s legal system with Sharia Law. They try to use ethnicity and religion to persuade a government to allow the use of Sharia Law instead of the Law of the Land. 2.) The refugee debacle that is also happening throughout Europe now. They have persuaded international law organizations to attempt to force, through international legal pressure, neighboring countries to accept scores of refugees at all costs to security of their countries. In the E.U. the refugees can then cross any E.U. border. Most of these refugees are not families; they are men in the 20 to 35 year old range. They are not refugees, they are suspicious at best, and sleeper cell players at worst. The U.N. has even gotten involved by using the International Court of Justice to enforce the U.N. Charter on every country that ratified the charter. Britain just exited the E.U. (Brexit) because of, in part, the lack of security with regards to borders. Brussels is the legal hub for the E.U. and they are deaf to any outcry from E.U. power-player countries. 3.) China and Russia use currency manipulation to affect the monetary exchange rate and devalue commodities exported by a country but overvalue commodities imported by the same country. The target then must spend resources appealing to the international legal system to try to force them back in line with the trade agreements, or tolerate a trade deficit and a weak economic state.

I also cite an example in the U.S. We’re having legal issues with the illegal alien and refugee traffic as well. The DOJ has, at the behest of the past presidents manipulated the legal system of the U.S. to allow scores of illegal aliens to move across the southern border with impunity. Thank God President Trump is putting the hammer down on these abuses (this sentence added on 6/28/2018). Illegal Latinos can get benefits, a driver’s license (in CA), and now some states are even about to give them the right to vote. Under the “Protocol Relating to the Status of Refugees” The U.S. government is forcing the American people to accept, under duress, tens of thousands of Middle Eastern and African refugees without vetting them properly to assess the potential national security risk. Of all refugees coming into the U.S. in 2016 (85,000) The Middle Eastern and African refugees account for 69.4% (59,000)! This is a classic example of Lawfare.

I cannot speak for other countries, but in the United States this Lawfare is forced on us by an elite cluster of individuals focused on the liberal progressive agenda. They are people like the Clinton’s, Obama’s, Biden’s, Pelosi’s, Reid’s, and so on. These people have loaded the highest cabinet positions with liberal, progressively focused people. They have especially manipulated our judicial system in part by strategically placing liberally progressive judges on the benches of our courts. They also abuse the spirit of the Patriot Act and U.N. Charter. This is Lawfare.

Lawfare delegitimizes a sovereign country’s right to defend its people; it is an abuse of the one thing that prevents all of us from reverting back to the Dark Ages and barbarism. Lawfare is an affront to basic human rights and is a perversion of the purpose of the law. Imagine what it would be like if our government could use any kind of horrifying weapon they wanted on the people, or if they could legally exterminate mentally ill people, or the elderly? Imagine what it would be like if only sanctioned religions or race were allowed, such as Islam, or if the rights of the one overrode the rights of the many, or how about if our government forced us to work 100 hours a week for nearly nothing?

I don’t have to imagine what it would be like; the history books called it medieval slavery, it sparked the Crusades, and it was the Islamic currency and culture for most Muslim nations from 622 AD to 1950 AD and is allowed under Islamic Sharia Law. That’s not evolution, its regression! The only people that fair well with this kind of lawlessness are the elite Islamic radicals, and progressive liberals that orchestrate it.