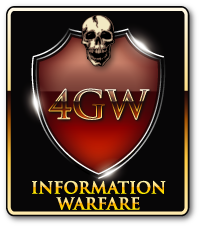 Information warfare is another 4th Generation Warfare tactic. This tactic is used by all countries to some level, but is masterfully used by the U.S., U.K., China, Russia, Israel, and Iran. It is also used through computer piracy and hijacking from countries like North Korea, Somalia, Jordan, Iraq, Afghanistan, Syria, Libya, and various other African continental countries. Attackers like to buy “burn phones” with stolen credit card numbers (it happened to me) and then use them in the ground war effort. Common terrorist groups are ISIS, Al-Qaeda, Boko Haram, and others too numerous to mention. The vast majority of these organizations get help with hacking, cracking and other methods of IW tactics through North Korea, China, and the darknet. Much of the malware, viruses, and spyware can be traced to the darknet where, for a price, one can get any kind of sophisticated computer code one might want.

Spyware and malware is the IW weapon of choice for high-tech countries like the U.S., Russia, U.K., China, and Israel. It is used predominately to acquire information from an adversary and to use it in war planning and execution. It can be stated that any computer linked to the internet or www is never safe from intrusion by an adversary. Some computers that are not linked to the www are vulnerable too because of undisciplined system administrators or operators. I cite the Stuxnet worm virus that was unleashed on Iran’s nuclear refinement program machinery as an example. That worm virus was inadvertently installed on their unconnected system by an undisciplined operator (who was later executed for his mistake). The originator of the virus still cannot be verified but is rumored to be the U.S., and Israel.

Hacking, hijacking, and cracking viruses are used predominately by the top 3 radical Muslim groups I listed earlier. They use it to gain access to civilian people’s monetary assets, location, and track what they do. They have been known to gain access to “clouds” of civilian computers with the use of hijack viruses and combine the computers as a single network with a common goal and focus. It’s like having a super computer at your fingertips. The social media hacks are also a favorite way to try to get personal information from social butterflies. Personally Identifiable Information (PII) is used as currency by some groups to gain soft target information, or to exploit a high visibility person to manipulate them (blackmail) into giving classified information they would normally not give out. As an example I cite Hillary Clinton’s unsecure email server. Sometimes they simply crack a password and sell the access password instead of using it. They might crack the passwords for 1,000,000 health records and simply sell the access tool before it’s discovered by the company securing the data.

Hacking, cracking, hijacking, spyware, and malware are all methods of information warfare used by nearly every country on the face of the earth. This IW is part of doing business in our high-tech, connected world. Non-corporate civilians can defend themselves partly by using good virus software and also by not keeping data on their computing devices that would be considered valuable by IW agents. Corporate information management companies must use the most secure methodologies (hardware and software) possible for client information security. A new tactic that corporations are using these days is what I call the “Proxy Handoff”. They simply give all record-keeping responsibilities to an outsourced, third party company. They claim to also give them accountability as well. It makes it difficult to prosecute or bring a class action against PII data originators. Our government can do their part by cracking down on our banks, health insurance companies, and employers to make them 100% accountable for our personal and financial information being stolen. ALL parties, from the third party information management company, the health provider itself, and the employer originating third party managed HRM information must be prosecuted and held accountable for data breaches and Identity Theft. Unless companies that save money at the expense of the employee, or client by using unreliable third party data managers, or out-of-date, and unreliable security hardware and software are held accountable nobody’s personal information is safe. Maybe they shouldn’t be in business if they can’t protect the employee, or client from a data breach. Unfortunately, now I must pay for an Identity Theft Protection Service forever to protect my families ID because the company I work for and the insurance companies all had data breaches that they say they are not responsible for. What do you think?

I want to thank Wikipedia for the wealth of information I have been able to glean from them. They make researching for an average guy like me much easier.