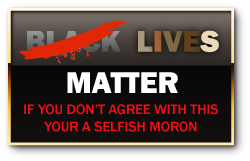 Here we are again one month after I wrote the first article about the Black Lives Matter Terrorist Organization. Now a cop wearing a body camera (body cameras are used by Milwaukee PD now at the request of BLM) was chasing a fleeing suspect (a known felon) and shot him twice in “center mass” hitting him in the chest and arm, killing him. I thank the officer for sweeping the garbage off the street and keeping us safe! The Black Lives Matter Terrorist Organization (BLMTO) has again caused great mayhem in the streets. This time in Milwaukee, and this time the burning, looting and general terrorism is again blamed on the police. You might ask the question; why don’t they burn down the police precinct stations? Because then the police can kill them in defense of the cities law enforcement infrastructure. Then they couldn’t get free TV’s and free cloths, and other stolen items from looting. They couldn’t act like primate animals. They couldn’t get sympathy from the political left for their fictitious cause to buy votes for the democrats.

It’s time they are put in their place. It’s time the National Guard was allowed to use deadly force against those inciting, and taking part in these riots and looting. The FBI is on the side of the left and can no longer be trusted to help in these matters. They cannot follow their original mission as was put forth by J. E. Hoover. This was demonstrated by their failure to indict Hillary Clinton for her national security breaches even after they admitted she was guilty! It’s time that our Homeland Security takes this matter up, and target these BLMTO members, organizers, and participants for indictment, trial, and imprisonment or execution.

If our government does not get a grip on this issue and quell it by force, the American People will turn into vigilante’s, and do it their selves! Then the government will have a serious shit storm to deal with.

Every white person I’ve talked to about this is absolutely sick and tired of the news media fabricating the story, or bending the facts to agree with the BLMTO. They should all have their broadcasting licenses suspended by the FCC, and those in charge prosecuted as terrorist sympathizers. They would sell their souls for a story, any story, and damn the consequences.

The white people I talked to also believe that black people are the most racist, self-serving, selfish cowards that they know of. They are starting to literally hate them, and all they stand for. There are very good black people that I know personally, but not one of them will stand up and denounce what the BLMTO is doing. They are also part of the problem and they, unfortunately, will be served the same justice served to the others in the BLMTO.

I blame Obama and his media monkeys for all that has happened between blacks and whites in the last 8 years. Through his failure as a leader and his failed promise of equality he actually has accomplished the opposite. His administration has fostered the worst 8 year stretch of community disorder and violence in American History. He has alienated blacks against whites, and whites against blacks.

Many of the issues with the law enforcement can only be blamed on themselves. Their law enforcement unions protect the guilty officers from prosecution, and their internal affairs display complete failure to “keep their own house in order” to the public. They really, seriously, absolutely need to pull their heads out of their asses, and get their house in order or community support for them will be non-existent, and they will be rendered impotent by their city administrators.