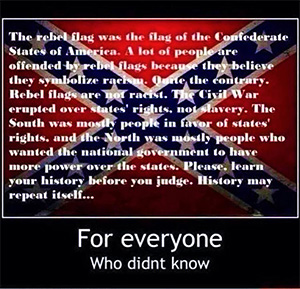 I did a little research on the “Rebel Flag” image and text at left because someone I know forwarded it to me to get my take on it. It originally came to the web from mingle2.com on 05/01/2016 at 11:49am by a 73 year old retired guy with the handle conrad_73. He now lives in Zurich. Here is the text on the image of the flag at left: “The rebel flag was the flag of the Confederate States of America. A lot of people are offended by rebel flags because they believe they symbolize racism. Quite the contrary, rebel flags are not racist. The Civil War erupted over states’ rights, not slavery. The south was mostly people in favor of states’ rights and the north was mostly people who wanted the national government to have more power over the states. Please, learn your history before you judge. History may repeat itself…”

The image text is 100% incorrect and was probably put on the “web” by conrad_73 because he was trying to push for the cause of preserving the rebel flag emblem for other reasons (protectionism). In fact the flag was the Battle Flag of Northern Virginia, and was the Confederate States of America’s Navy Jack. As an example of what a Navy Jack is the U.S. Navy Jack is our national flags stars on blue background (from our flag), but without the red and white stripes. The so called “Rebel Flag” was the same. The Navy Jack flag is flown from a flagstaff on the bow of all active duty and reserve U.S. Navy ships. It can be seen today on all U.S. Naval vessels when in port. So, to say that it was the “flag” of the Confederate States of America is not true. That flag was called the “Stars and Bars” and does not even resemble the rebel flag.

Now as far as the philosophy behind the rebel flag, that’s also incorrect. The Civil War did, in fact happen, due in part to Abraham Lincoln’s campaign for the presidency on the platform of banning slavery in all U.S. Territories (34 at the time). The 11 southern “slave states” saw this as the first step of abolishment of slavery. Other Civil War causes were; “sectionalism” due to different economies, social constructs, and political values; “protectionism” due to manual slave labor being cheap and economically beneficial to the southern states; “states’ rights” due to the interpretation by some southern states that the constitution allowed states to succeed from the union but James Buchannan argued that the founding fathers formed the union based on a perpetual union and not a temporary one. 7 of the southern states voted to succeed from the union, eventually including 11 southern states, this ushered in the attack on Ft. Sumter (a U.S. Military Installation). This was the impetus to the American Civil War.

Since the 1970’s the Rebel Flag has been hijacked by most white supremacist groups as a symbol of white power. The KKK, Aryan Nation, and Skinhead Subculture’s all embrace the Rebel Flag equally with the Nazi swastika as their symbol of white supremacy. Unfortunately the Americans that embrace it as a statement of independence in thought and action have allowed this hijacking to take place. As of this writing approximately 72% of American people now view it as a symbol of racism although 28% do not. That being said, it is considered a symbol of racism. The Black Lives Matter Terrorist group has caused, through “Lawfare”, the wholesale disenfranchisement of many American’s cherished symbols because they are so self-centered in their radical agenda of black supremacy. So, as we can see, they are committing the very crime they propagandize that others are committing (a long-standing Democratic Party tactic).

As a follow-up note it should be stated that the Democratic Party voted 100% in favor of slavery, and the Democratic Party was the party of all 11 southern states in favor of succeeding from the union. The Democratic Party promises much to minority black citizens, but only delivers just enough to them to keep them wanting more. In this way the Democratic Party can always rely on them for a vote to get a few more promises. Republicans have ALWAYS been against slavery and special rights for ANYONE. The record of party voting throughout our nation’s history is also a fact, but racist liberals refuse to acknowledge it. Why do you think they never bring up voting histories when campaigning for office? It would expose the racist in them all. The Democratic Party was corrupt then, and is corrupt now. Extremism in anything is caustic to all American relations, all the time, and just because your offended by something doesn’t make it right. Lighten-up and stop being such jack asses!

National Sovereignty of a country is paramount before personal ethnic identity because without it we all become slaves to the elite few, and eventually a single world government, religion, and economy.