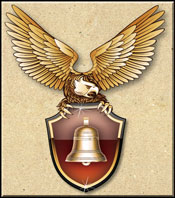 Welcome! we at TFCP hope you will find something here that appeals to you. We are “Constitutional Conservative’s”, and patriots to our true freedoms as spelled out in our Constitution. We believe in holding those that would tarnish our country with their cowardice accountable. We believe in prosecuting those that would trample our constitutional rights with their unflagging zeal in litigating our Constitution into a worthless piece of paper.

We are determined to inform the uninformed of those travesties that undermine our free nation. To ring the bell of freedom and liberty!  To form a “common thinking”, freedom seeking, institutional mechanism to combat the pacified “main stream media”. To cause the truth to arrive at everyone’s ears and eyes.

We will laud those that work to keep us free, and promote their names on this website as true Constitution Patriots. So from all of us here, we welcome you!

7 thoughts on “Welcome To Tar and Feather Constitution Patriots”